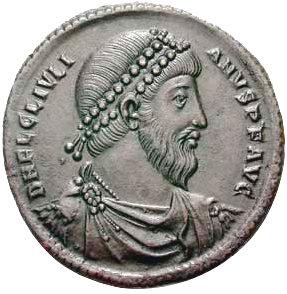 Julian (Latin: Flavius Claudius Julianus; Greek: Ἰουλιανός Iulianos; 331 – 26 June 363) was Roman emperor from 361 to 363, as well as a notable philosopher and author in Greek. His rejection of Christianity, and his promotion of Neoplatonic Hellenism in its place, caused him to be remembered as Julian the Apostate in Christian tradition.Julian was a member of the Constantinian dynasty; his father Julius Constantius was a half-brother of Emperor Constantine the Great. After Constantine died in 337, his sons had many of their relatives executed to prevent rival claims to the throne. Julian's father was one of those murdered on their orders, but Julian and his half-brother Constantius Gallus were spared. The orphaned princes spent much of their lives under the control of their cousin, Emperor Constantius II. However, Constantius II allowed Julian to freely pursue an education in the Greek-speaking east, to the result that Julian became unusually cultured for an emperor of his time. In 354, the emperor executed Julian's brother Gallus. Julian himself was imprisoned, but he was spared at the request of Empress Eusebia. In 355, Constantius II summoned Julian to court and appointed him to rule Gaul. Despite his inexperience, Julian showed unexpected success in his new capacity, defeating and counterattacking Germanic raids across the Rhine and encouraging the ravaged provinces' return to prosperity. In 360, he was proclaimed emperor by his soldiers at Lutetia (Paris), sparking a civil war with Constantius. However, Constantius died before the two could face each other in battle, and named Julian as his successor. In 363, Julian embarked on an ambitious campaign against the Sasanian Empire. The campaign was initially successful, securing a victory outside Ctesiphon in Mesopotamia. However, he did not attempt to besiege the capital. Julian instead moved into Persia's heartland, but he soon faced supply problems and was forced to retreat northwards while being ceaselessly harassed by Persian skirmishes. During the Battle of Samarra, Julian was mortally wounded under mysterious circumstances. He was succeeded by Jovian, a senior officer in the imperial guard, who was obliged to cede territory, including Nisibis, in order to save the trapped Roman forces.Julian was a man of unusually complex character: he was "the military commander, the theosophist, the social reformer, and the man of letters". He was the last non-Christian ruler of the Roman Empire, and he believed that it was necessary to restore the Empire's ancient Roman values and traditions in order to save it from dissolution. He purged the top-heavy state bureaucracy, and attempted to revive traditional Roman religious practices at the expense of Christianity. His attempt to build a Third Temple in Jerusalem was probably intended to harm Christianity rather than please Jews. Julian also forbade the Christians from teaching and learning classical texts.
Read more or edit on Wikipedia