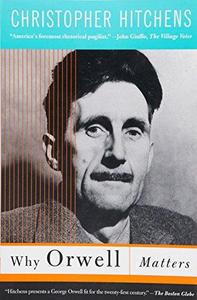 Why Orwell Matters, released in the UK as Orwell's Victory, is a book-length biographical essay by Christopher Hitchens. In it, the author relates George Orwell's thoughts on and actions in relation to: The British Empire, the Left, the Right, the United States of America, English conventions, feminism, and his controversial list for the British Foreign Office.
Read more or edit on Wikipedia