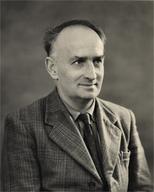 Waldo Goronwy Williams (30 September 1904 – 20 May 1971) was one of the leading Welsh-language poets of the 20th century. He was also a notable Christian pacifist, anti-war campaigner, and Welsh nationalist. He is often referred to by his first name only. Source: Wikipedia (en)