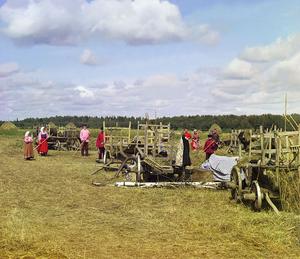 The Russian Empire was an empire and the final period of the Russian monarchy from 1721 to 1917, ruling across large parts of Eurasia. It succeeded the Tsardom of Russia following the Treaty of Nystad, which ended the Great Northern War. The rise of the Russian Empire coincided with the decline of neighbouring rival powers: the Swedish Empire, the Polish–Lithuanian Commonwealth, Qajar Iran, the Ottoman Empire, and Qing China. It also held colonies in North America between 1799 and 1867. Covering an area of approximately 22,800,000 square kilometres (8,800,000 sq mi), it remains the third-largest empire in history, surpassed only by the British Empire and the Mongol Empire; it ruled over a population of 125.6 million people per the 1897 Russian census, which was the only census carried out during the entire imperial period. Owing to its geographic extent across three continents at its peak, it featured great ethnic, linguistic, religious, and economic diversity. From the 10th–17th centuries, the land was ruled by a noble class known as the boyars, above whom was a tsar (later adapted as the "Emperor of all the Russias"). The groundwork leading up to the establishment of the Russian Empire was laid by Ivan III (1462–1505): he tripled the territory of the Russian state and laid its foundation, renovating the Moscow Kremlin and also ending the dominance of the Golden Horde. From 1721 until 1762, the Russian Empire was ruled by the House of Romanov; its matrilineal branch of patrilineal German descent, the House of Holstein-Gottorp-Romanov, ruled from 1762 until 1917. At the beginning of the 19th century, the territory of the Russian Empire extended from the Arctic Ocean in the north to the Black Sea in the south, and from the Baltic Sea in the west to Alaska, Hawaii, and California in the east. By the end of the 19th century, it had expanded its control over most of Central Asia and parts of Northeast Asia. The Russian Empire had been through the famine in 1891–92, the rise of Communism, especially Bolsheviks and Mensheviks; and suffering defeat from two wars. These factors led to revolutions twice, and the second one, which occurred in February 1917, led to the end of almost two centuries of imperial rule, including one of the four continental empires which were collapsed after World War I, along with Germany, Austria-Hungary, and Turkey.Peter I (1682–1725) fought numerous wars and expanded an already vast empire into a major power of Europe. During his rule, he moved the Russian capital from Moscow to the new model city of Saint Petersburg, which was largely built according to designs of the Western world; he also led a cultural revolution that replaced some of the traditionalist and medieval socio-political customs with a modern, scientific, rationalist, and Western-oriented system. Catherine the Great (1762–1796) presided over a golden age: she expanded the Russian state by conquest, colonization, and diplomacy, while continuing Peter I's policy of modernization towards a Western model. Alexander I (1801–1825) played a major role in defeating the militaristic ambitions of Napoleon and subsequently constituting the Holy Alliance, which aimed to restrain the rise of secularism and liberalism across Europe. The Russian Empire further expanded to the west, south, and east, concurrently establishing itself as one of the most powerful European powers. Its victories in the Russo-Turkish Wars were later checked by defeat in the Crimean War (1853–1856), leading to a period of reform and intensified expansion into Central Asia. Alexander II (1855–1881) initiated numerous reforms, most notably the 1861 emancipation of all 23 million serfs. His official policy involved the responsibility of the Russian Empire towards the protection of Eastern Orthodox Christians residing within the Ottoman-ruled territories of Europe; this was one factor that later led to the Russian entry into World War I on the side of the Allied Powers against the Central Powers. Until the 1905 Russian Revolution, the Russian Empire functioned as an absolute monarchy, following which a semi-constitutional monarchy was nominally established. However, it functioned poorly during World War I, leading to the February Revolution. With the abdication of Nicholas II in 1917, the monarchy was abolished. In the aftermath of the February Revolution, the short-lived Russian Provisional Government proclaimed the establishment of the Russian Republic as a successor across its territories. The October Revolution saw the Bolsheviks seize power in the Russian Republic, sparking the Russian Civil War. In 1918, the Bolsheviks executed the Romanov family, and after emerging victorious from the Russian Civil War in 1922–1923, they established the Soviet Union across most of the territory of the former Russian Empire.
Read more or edit on Wikipedia