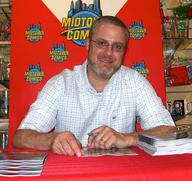 Robert Venditti is an American comic book writer, known for his work on the Top Shelf Productions title The Surrogates, which was adapted to a major motion picture starring Bruce Willis directed by Jonathan Mostow for Disney., and for the Valiant Comics title X-O Manowar. He is also known for his work on DC Comics titles such as The Flash, Green Lantern, Justice League, and Hawkman. He has also adapted the Percy Jackson & The Olympians and The Heroes of Olympus book series by Rick Riordan into graphic novels. Source: Wikipedia (en)