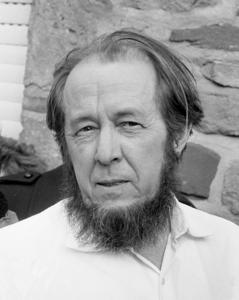 Aleksandr Isayevich Solzhenitsyn (11 December 1918 – 3 August 2008) was a Russian novelist, philosopher, historian, short story writer, and political prisoner. One of the most famous Soviet dissidents, Solzhenitsyn was an outspoken critic of communism and helped to raise global awareness of political repression in the Soviet Union (USSR), in particular the Gulag system. Solzhenitsyn was born into a family that defied the USSR anti-religious campaign (1921–1928) and remained devout members of the Russian Orthodox Church. While still young, Solzhenitsyn lost his faith in Christianity and became a firm believer in both atheism and Marxism–Leninism; in his later life, he gradually became a philosophically-minded Eastern Orthodox Christian as a result of his experience in prison and the camps. While serving as a captain in the Red Army during World War II, Solzhenitsyn was arrested by the SMERSH and sentenced to eight years in the Gulag and then internal exile for criticizing Soviet leader Joseph Stalin in a private letter. As a result of the Khrushchev Thaw, Solzhenitsyn was released and exonerated, and he returned to the Christian faith of his childhood and pursued writing novels about repressions in the Soviet Union and his experiences. He published his first novel, One Day in the Life of Ivan Denisovich in 1962, with approval from Soviet leader Nikita Khrushchev, which was an account of Stalinist repressions. Solzhenitsyn's last work to be published in the Soviet Union was Matryona's Place in 1963. Following the removal of Khrushchev from power, the Soviet authorities attempted to discourage him from continuing to write. Solzhenitsyn continued to work on further novels and their publication in other countries including Cancer Ward in 1968, August 1914 in 1971, and The Gulag Archipelago in 1973 outraged the Soviet authorities, and Solzhenitsyn lost his Soviet citizenship in 1974 and was flown to West Germany. In 1976, he moved with his family to the United States, where he continued to write. In 1990, shortly before the dissolution of the Soviet Union, his citizenship was restored, and four years later he returned to Russia, where he remained until his death in 2008. He was awarded the 1970 Nobel Prize in Literature "for the ethical force with which he has pursued the indispensable traditions of Russian literature", and The Gulag Archipelago was a highly influential work that "amounted to a head-on challenge to the Soviet state", and sold tens of millions of copies.
Read more or edit on Wikipedia