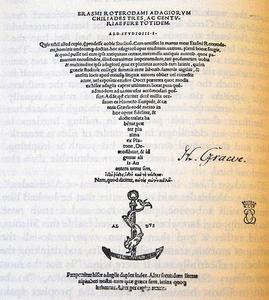 Adagia (singular adagium) is the title of an annotated collection of Greek and Latin proverbs, compiled during the Renaissance by Dutch humanist Desiderius Erasmus Roterodamus. Erasmus' collection of proverbs is "one of the most monumental ... ever assembled" (Speroni, 1964, p. 1). The first edition, titled Collectanea Adagiorum, was published in Paris in 1500, in a slim quarto of around eight hundred entries. By 1508, after his stay in Italy, Erasmus had expanded the collection (now called Adagiorum chiliades tres or "Three thousands of proverbs") to over 3,000 items, many accompanied by richly annotated commentaries, some of which were brief essays on political and moral topics. The work continued to expand right up to the author's death in 1536 (to a final total of 4,151 entries), confirming the fruit of Erasmus' vast reading in ancient literature.
Read more or edit on Wikipedia