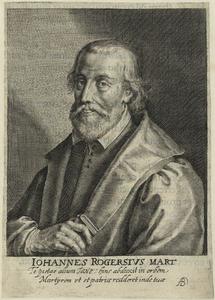 John Rogers (c. 1505 – 4 February 1555) was an English clergyman, Bible translator and commentator. He guided the development of the Matthew Bible in vernacular English during the reign of Henry VIII and was the first English Protestant executed as a heretic under Mary I of England, who was determined to restore Roman Catholicism.
Read more or edit on Wikipedia