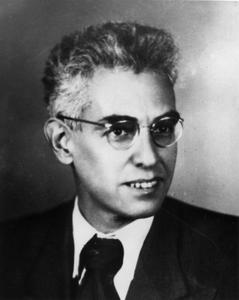 Alexander Romanovich Luria (Russian: Алекса́ндр Рома́нович Лу́рия; 16 July 1902 – 14 August 1977) was a Soviet Russian neuropsychologist, often credited as a father of modern neuropsychological assessment. He developed an extensive and original battery of neuropsychological tests during his clinical work with brain-injured victims of World War II, which are still used in various forms. He made an in-depth analysis of the functioning of various brain regions and integrative processes of the brain in general. Luria's magnum opus, Higher Cortical Functions in Man (1962), is a much-used psychological textbook which has been translated into many languages and which he supplemented with The Working Brain in 1973. It is less known that Luria's main interests, before the war, were in the field of psycho-semantics (that is, research into how people attribute meaning to words and instructions). He became famous for his studies of low-educated populations in the south of the Soviet Union showing that they use different categorization than the educated world (determined by functionality of their tools). He was one of the founders of Cultural-Historical Psychology, and a leader of the Vygotsky Circle, also known as "Vygotsky-Luria Circle". Apart from his work with Vygotsky, Luria is widely known for two extraordinary psychological case studies: The Mind of a Mnemonist, about Solomon Shereshevsky, who had highly advanced memory; and The Man with a Shattered World, about Lev Zasetsky, a man with a severe traumatic brain injury. During his career Luria worked in a wide range of scientific fields at such institutions as the Academy of Communist Education (1920-1930s), Experimental Defectological Institute (1920-1930s, 1950-1960s, both in Moscow), Ukrainian Psychoneurological Academy (Kharkiv, early 1930s), All-Union Institute of Experimental Medicine, and the Burdenko Institute of Neurosurgery (late 1930s). A Review of General Psychology survey, published in 2002, ranked Luria as the 69th most cited psychologist of the 20th century.
Read more or edit on Wikipedia