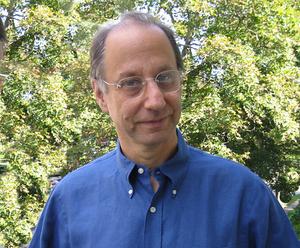 David Weinberger (born 1950) is an American author, technologist, and speaker. Trained as a philosopher, Weinberger's work focuses on how technology — particularly the internet and machine learning — is changing our ideas, with books about the effect of machine learning’s complex models on business strategy and sense of meaning; order and organization in the digital age; the networking of knowledge; the Net's effect on core concepts of self and place; and the shifts in relationships between businesses and their markets. Wenberger holds a Ph.D. from the University of Toronto and taught college from 1980-1986 primarily at Stockton University (then known as Stockton State College). From 1986 until the early 2000s he wrote about technology, and became a marketing consultant and executive at several high-tech companies, including Interleaf and Open Text. His best-known book is 2000’s Cluetrain Manifesto (co-authored), a work noted for its early awareness of the Net as social medium. From 1997 through 2003 he was a frequent commentator on National Public Radio's All Things Considered, with about three dozen contributions. In addition, he was a gag writer for the comic strip "Inside Woody Allen" from 1976-1983.In 2004 he became a Fellow at Harvard’s Berkman Klein Center for Internet & Society and currently serves as a senior researcher there. In 2008 he was a visiting lecturer at Harvard Law School where he co-taught a course on "The Web Difference" with John Palfrey. From 2010 to 2014 he was Co-Director of the Harvard Library Innovation Lab. In 2015, he was a fellow at the Shorenstein Center on Media, Politics and Public Policy at Harvard’s Kennedy School of Government. He is an advisor to Harvard’s MetaLAB metaLAB, and the Harvard Business School Digital Initiative, and other non-commercial and commercial organizations. He continues to teach courses at Harvard Extension School on the effect of technology on ideas. Beginning in 2015, Weinberger turned much of his attention to the philosophical and ethical implications of machine learning, resulting in a series of articles, talks and workshops, and his 2019 book Everyday Chaos. From June 2018 to June 2020, he was embedded in Google’s People + AI Research (PAIR), a machine learning research group located in Cambridge, Massachusetts, as a part-time writer-in-residence. Weinberger has been involved in Internet policy and advocacy. He had the title Senior Internet Advisor to Howard Dean's 2004 presidential campaign, and was on technology policy advisory councils for both of Barack Obama’s presidential campaigns and Hillary Clinton’s 2016 campaign. From 2010-12 he was a Franklin Fellow at the U.S. Department of State, working with the e-Diplomacy Group. He has written and spoken frequently in favor of policies that favor a more open Internet, including in Salon, NPR, We Are the Internet and in a series of video interviews with the Federal Communications Commission.
Read more or edit on Wikipedia