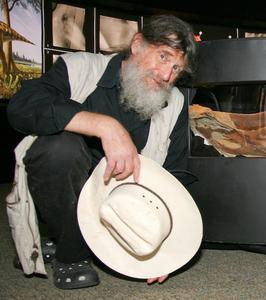 Robert Thomas Bakker (born March 24, 1945) is an American paleontologist who helped reshape modern theories about dinosaurs, particularly by adding support to the theory that some dinosaurs were endothermic (warm-blooded). Along with his mentor John Ostrom, Bakker was responsible for initiating the ongoing "dinosaur renaissance" in paleontological studies, beginning with Bakker's article "Dinosaur Renaissance" in the April 1975 issue of Scientific American. His specialty is the ecological context and behavior of dinosaurs. Bakker has been a major proponent of the theory that dinosaurs were warm-blooded, smart, fast, and adaptable. He published his first paper on dinosaur endothermy in 1968. His seminal work, The Dinosaur Heresies, was published in 1986. He revealed the first evidence of parental care at nesting sites for Allosaurus. He also observed evidence in support of Eldredge and Gould's theory of punctuated equilibrium in dinosaur populations. Bakker currently serves as the Curator of Paleontology for the Houston Museum of Natural Science.
Read more or edit on Wikipedia