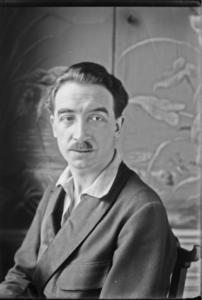 Thierry Sandre (real name Charles Moulié) (9 May 1891 in Bayonne – 1950) was a French writer, poet, essayist. He won the Prix Goncourt in 1924 for Le Chèvrefeuille. Thierry Sandre was a specialist in French literature of the sixteenth century, also known under the pseudonym Jean Dumoulin. He was also the translator or adapter of Greek, Latin, or Arabic. He was the secretary to Pierre Louÿs before World War I. He spent much of the war in captivity in Germany. In 1919, he was a founding member of the Association of War Writers. From October 1921, he participated actively, in the publication of an anthology of dead war writers in five volumes. In 1936, he became a member of the Third Order of Saint Dominic, the Dominicans in Paris. He resumed service in 1940, and was again taken prisoner, but released in 1941. He became a follower of the Ordre Nouveau (1940s), and because the two books he published in 1942, and 1943 he was included on the list of banned writers after the war, He managed to rehabilitate himself, and published several more books.
Read more or edit on Wikipedia