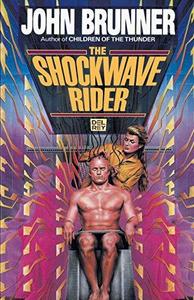 The Shockwave Rider is a science fiction novel by John Brunner, originally published in 1975. It is notable for its hero's use of computer hacking skills to escape pursuit in a dystopian future, and for the coining of the word "worm" to describe a program that propagates itself through a computer network. It also introduces the concept of a Delphi pool, perhaps derived from the RAND Corporation's Delphi method – a futures market on world events which bears close resemblance to DARPA's controversial and cancelled Policy Analysis Market.
Read more or edit on Wikipedia