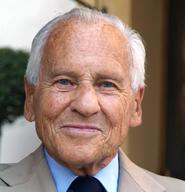 Count Jean Bruno Wladimir François de Paule Le Fèvre d'Ormesson (16 June 1925 – 5 December 2017) was a French novelist. He was the author of forty books, the director of Le Figaro from 1974 to 1979, and the Dean of the Académie française. Source: Wikipedia (en)