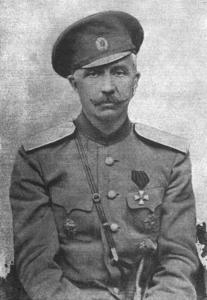 Pyotr Nikolayevich Krasnov (Russian: Пётр Николаевич Краснов; 22 September (old style: 10 September) 1869 – 17 January 1947), sometimes referred to in English as Peter Krasnov, was a Don Cossack historian and officer, promoted to Lieutenant General of the Russian army when the revolution broke out in 1917, one of the leaders of the counter-revolutionary White movement afterwards and a Nazi collaborator who mobilized Cossack forces to fight against the Soviet Union during World War II.
Read more or edit on Wikipedia