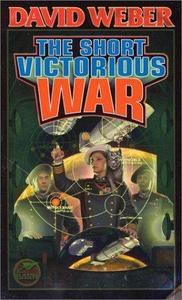 The Short Victorious War is a science fiction novel by American writer David Weber, first published in 1994. It is the third book in the Honor Harrington series. Its title comes from a quotation by Vyacheslav von Plehve in reference to the Russo-Japanese War: "What this country needs is a short, victorious war to stem the tide of revolution." That quotation is one of the novel's two epigraphs; the other is a quotation from Robert Wilson Lynd: "The belief in the possibility of a short decisive war appears to be one of the most ancient and dangerous of human illusions."
Read more or edit on Wikipedia