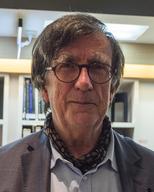 Bruno Latour (; French: [latuʁ]; born 22 June 1947) is a French philosopher, anthropologist and sociologist. He is especially known for his work in the field of science and technology studies (STS). After teaching at the École des Mines de Paris (Centre de Sociologie de l'Innovation) from 1982 to 2006, he became Professor at Sciences Po Paris (2006–2017), where he was the scientific director of the Sciences Po Medialab. He retired from several university activities in 2017. He was also a Centennial Professor at the London School of Economics.Latour is best known for his books We Have Never Been Modern (1991; English translation, 1993), Laboratory Life (with Steve Woolgar, 1979) and Science in Action (1987). Although his studies of scientific practice were at one time associated with social constructionist approaches to the philosophy of science, Latour has diverged significantly from such approaches. He is best known for withdrawing from the subjective/objective division and re-developing the approach to work in practice. Latour said in 2017 that he is interested in helping to rebuild trust in science and that some of the authority of science needs to be regained. Along with Michel Callon and John Law, Latour is one of the primary developers of actor–network theory (ANT), a constructionist approach influenced by the ethnomethodology of Harold Garfinkel, the generative semiotics of Algirdas Julien Greimas, and (more recently) the sociology of Émile Durkheim's rival Gabriel Tarde. Source: Wikipedia (en)