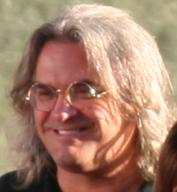 Paul Greengrass (born 13 August 1955) is a British film director, film producer, screenwriter and former journalist. He specialises in dramatisations of historic events and is known for his signature use of hand-held cameras. His early film Bloody Sunday (2002), about the 1972 shootings in Derry, Northern Ireland, won the Golden Bear at 52nd Berlin International Film Festival. Other films he has directed include three in the Bourne action/thriller series: The Bourne Supremacy (2004), The Bourne Ultimatum (2007), and Jason Bourne (2016); United 93 (2006), for which he won the BAFTA Award for Best Director and received an Academy Award for Best Director nomination; Green Zone (2010); and Captain Phillips (2013). In 2004, he co-wrote and produced the film Omagh, which won the British Academy Television Award. In 2007, Greengrass co-founded Directors UK, a professional organisation of British filmmakers, and was its first president until 2014. In 2008, The Telegraph named him among the most influential people in British culture. In 2017, Greengrass was honoured with a British Film Institute Fellowship. Source: Wikipedia (en)