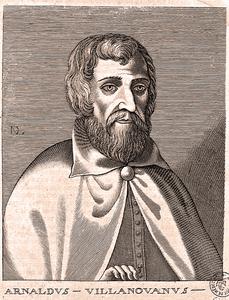 physician and alchemist of Crown of Aragon

Arnaldus de Villa Nova (also called Arnau de Vilanova in Catalan, his language, Arnaldus Villanovanus, Arnaud de Ville-Neuve or Arnaldo de Villanueva, c. 1240–1311) was a physician and a religious reformer. He was also thought to be an alchemist (his house in Montpellier, France, had a carved door showing a roaring lion and dragon that bit his tail, also known as Ouroboros, both recognized alchemical symbols). The fact that several renown alchemists recognized him as an adept reinforces the thesis that he was an alchemist. He was also, like most wisemen of his time, an astrologer. He was born in the Crown of Aragon, probably Villanueva de Jiloca (Aragon) or Valencia, and he studied medicine and he also took some courses of theology. After living at the court of Aragon and teaching for many years in the Montpellier School of Medicine, he went to Paris, where he gained a considerable reputation; but he incurred the enmity of ecclesiastics. In 1311 he was summoned to Avignon by Pope Clement V, but he died on the voyage off the coast of Genoa.He is credited with translating a number of medical texts from Arabic, including works by Ibn Sina Avicenna, Abu-l-Salt, and Galen. Many alchemical writings, including Rosarius Philosophorum, Novum Lumen, or Flos Florum, are also ascribed to him, but they are not authentic. Collected editions of them were published at Lyon in 1504 and 1532 (with a biography by Symphorianus Campegius), at Basel in 1585, and at Lyon in 1686. He is also the reputed author of important medical works, such as Speculum medicinae and Regimen sanitatis ad regem Aragonum, but many others, such as Breviarium Practicae, were falsely attributed to him. In addition, he wrote many theological works for the reformation of Christianity in Latin and in Catalan, some of them including apocalyptical prophecies.
Read more or edit on Wikipedia

Rosary of the Philosophers