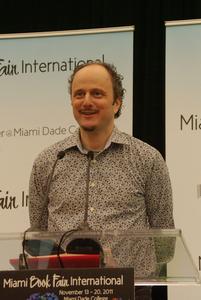 Jeffrey Kent Eugenides (born March 8, 1960) is an American novelist and short story writer. He has written numerous short stories and essays, as well as three novels: The Virgin Suicides (1993), Middlesex (2002), and The Marriage Plot (2011). The Virgin Suicides served as the basis of a feature film, while Middlesex received the 2003 Pulitzer Prize for Fiction in addition to being a finalist for the National Book Critics Circle Award, the International Dublin Literary Award, and France's Prix Médicis.
Read more or edit on Wikipedia