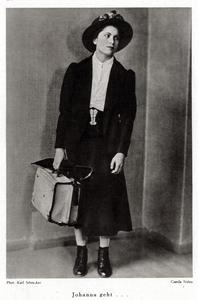 Saint Joan of the Stockyards

Saint Joan of the Stockyards (German: Die heilige Johanna der Schlachthöfe) is a play written by the German modernist playwright Bertolt Brecht between 1929 and 1931, after the success of his musical The Threepenny Opera and during the period of his radical experimental work with the Lehrstücke. It is based on the musical that he co-authored with Elisabeth Hauptmann, Happy End (1929). In this version of the story of Joan of Arc, Brecht transforms her into "Joan Dark", a member of the "Black Straw Hats" (a Salvation Army-like group) in 20th-century Chicago. The play charts Joan's battle with Pierpont Mauler, the unctuous owner of a meat-packing plant. Like her predecessor, Joan is a doomed woman, a martyr and (initially, at least) an innocent in a world of strike-breakers, fat cats, and penniless workers. Like many of Brecht's plays it is laced with humor and songs as part of its epic dramaturgical structure and deals with the theme of emancipation from material suffering and exploitation.The play was broadcast on Berlin Radio on the 11 April 1932, with Carola Neher as Joan and Fritz Kortner as Mauler. The cast also included Helene Weigel, Ernst Busch, Peter Lorre, Paul Bildt and Friedrich Gnaß. The play did not receive its first theatrical production until the 30 April 1959, at the Deutsches Schauspielhaus in Hamburg, after Brecht's death. Brecht had asked Gustaf Gründgens to direct, with scenic design by Caspar Neher and music by Siegfried Franz. Brecht's daughter Hanne Hiob played Joan.Brecht wrote two other versions of the Joan of Arc story: The Visions of Simone Machard (1942) and The Trial of Joan of Arc of Proven, 1431 (1952).
Read more or edit on Wikipedia