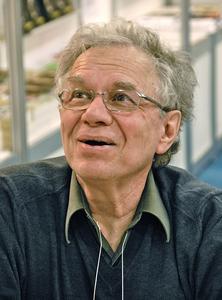 Yves Beauchemin (born 26 June 1941) is a Quebec novelist. Born in Rouyn-Noranda, Quebec, Beauchemin received his degree in French literature and art history at the Université de Montréal in 1965. He taught literature at the Collège Garneau and Université Laval. Beauchemin was working as an editor in a Montreal publishing firm when he began contributing essays and stories to magazines and newspapers. In 1969 he accepted a position as a researcher at Radio-Québec. Beauchemin's first novel, L'enfirouapé (1974), won the Prix France-Québec. His second novel, Le matou (1981), became the all-time best-selling novel in French Quebec literature and has been translated into seventeen languages. Beauchemin won the Prix Jean Giono for his third novel, Juliette Pormerleau (1989). In his fiction Beauchemin is a detached but caring observer of the contemporary world around him. The panoramic canvases of his novels capture the teeming life of the streets, reflecting their author's appreciation of such great nineteenth-century writers as Balzac, Dickens, Dostoevsky and Gogol.He resides in Longueuil, Quebec.
Read more or edit on Wikipedia