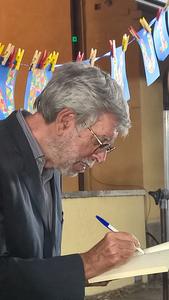 Domenico Starnone (born 1943) is an Italian writer, screenwriter and journalist. Born in Saviano, near Naples, he has worked for several newspapers and satirical magazines, including L'Unità, Il Manifesto, Tango, and Cuore, usually about episodes of his life as a high school teacher. He also works as screenwriter. Movies La scuola, The Ties (both by Daniele Luchetti), Auguri Professore (by Riccardo Milani) and Denti (by Gabriele Salvatores) are based on his books. One of his fictional books is Via Gemito, which won the Premio Strega in 2001. It was suggested in 2006 that the mysterious writer Elena Ferrante, author of L'amore molesto and I giorni dell'abbandono, is Starnone himself. In a collection of interviews, the Frantumaglia: A Writer's Journey, Ferrante addresses these speculations; she writes that in relation to the speculation that Ferrante is likely to be Starnone, due to her anonymity, and his feeling 'tired of everyone asking if he's Ferrante', she expresses 'That he's right and I feel guilty. But I hold him in great esteem and I'm certain that he understands my motivations. My identity, my sex can be found in my writing. Everything that has sprouted up around that is yet more evidence of the character of Italians in the first years of the twenty-first century.'Starnone is married to Anita Raja, the literary translator who was said to be the author Elena Ferrante in a report by the Italian investigative journalist Claudio Gatti in 2016.In 2017 an international research has compared the language of the mysterious novelist with 150 novels, revealing singular similarities with Starnone. The same research team doesn't rule out that Ferrante's novels are the result of the collaboration between Starnone and his wife Anita Raja.
Read more or edit on Wikipedia