Zsuzsanna Emese Mokcsay (born 30 January 1940 in Budapest, Hungary) is a Hungarian author, activist, journalist, playwright and songwriter living in America who writes about feminist spirituality and Dianic Wicca under the pen name Zsuzsanna Budapest or Z. Budapest. She is the founder of the Susan B. Anthony Coven #1, which was founded in 1971 as the first women-only witches' coven. She founded the female-only type of Dianic Wicca.She is the founder and director of the Women's Spirituality Forum, a nonprofit organization featuring lectures, retreats and other events, and was the lead of a cable TV show called 13th Heaven. She had an online autobiography entitled Fly by Night, and wrote for the religion section of the San Francisco Examiner on subjects related to Pagan religions. Her play The Rise of the Fates premiered in Los Angeles in the mid-seventies. She is the composer of several songs including "We All Come From the Goddess". She lives near Santa Cruz, California.
Read more or edit on Wikipedia 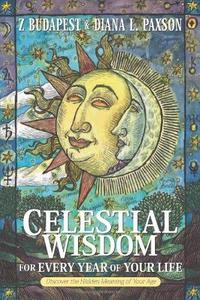 Celestial Wisdom for Every Year of Your Life