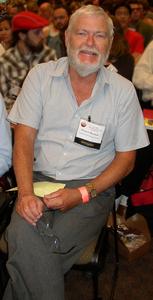 Gregory Benford (born January 30, 1941) is an American science fiction author and astrophysicist who is Professor Emeritus at the Department of Physics and Astronomy at the University of California, Irvine. He is a contributing editor of Reason magazine.Benford wrote the Galactic Center Saga science fiction novels, beginning with In the Ocean of Night (1977). The series postulates a galaxy in which sentient organic life is in constant warfare with sentient electromechanical life. In 1969 he wrote "The Scarred Man", the first story about a computer virus, published in 1970.
Read more or edit on Wikipedia