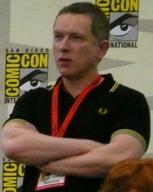 James Dale Robinson is a British writer of American comic books and screenplays best known for co-creating the character of Starman (Jack Knight) with Tony Harris and reviving the Justice Society of America in the late 1990s. His other notable works include the screenplay for the film adaptation of the Alan Moore and Kevin O'Neill's comic book series The League of Extraordinary Gentlemen and the multi-year crossover storyline "Superman: New Krypton". Source: Wikipedia (en)