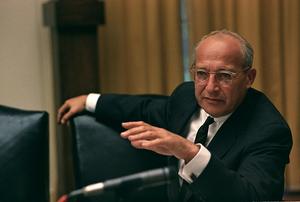 Walt Whitman Rostow (October 7, 1916 – February 13, 2003) was an American economist, professor and political theorist who served as National Security Advisor to President of the United States Lyndon B. Johnson from 1966 to 1969.Rostow worked in the Office of Strategic Services during World War II and later was a foreign policy adviser and speechwriter for presidential candidate and then President John F. Kennedy; he is often credited with writing Kennedy's famous "New Frontier" speech. Prominent for his role in shaping US foreign policy in Southeast Asia during the 1960s, he was a staunch anti-communist, noted for a belief in the efficacy of capitalism and free enterprise, and strongly supported US involvement in the Vietnam War. Rostow is known for his book The Stages of Economic Growth: A Non-Communist Manifesto (1960), which was used in several fields of social science. Rostow's theories were embraced by many officials in both the Kennedy and Johnson administrations as a possible counter to the increasing popularity of communism in Asia, Africa and Latin America. Rostow never regretted or apologized over his actions in Vietnam, and this stance effectively ostracized him from work in top American universities after his retirement from government service. His elder brother Eugene Rostow also held a number of high government foreign policy posts.
Read more or edit on Wikipedia