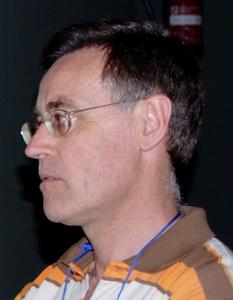 Catalan translator and author of both Catalan and Esperanto

Jesús Abel Montagut i Masip (Catalan pronunciation: [ʒəˈzuz əˈβɛl muntəˈɣut i məˈzip]; born 1953 in Llardecans), commonly known as Abel Montagut, is a Catalan translator and author of both Catalan and Esperanto. He learnt Esperanto at 14 and is a former high school teacher of the Catalan language and literature. In 1982 he began writing Poemo de Utnoa (The Epic of Utnoa), an epic inspired by various works including: Epic of Gilgamesh, Ramayana, The Bible, Iliad, The Odyssey, Aeneid, etc. He won a prize at the 1983 Internaciaj Floraj Ludoj (International Floral Games) with a poem from Amkantoj, a translation of Cants d'amor (Love songs) by Ausiàs March.
Read more or edit on Wikipedia