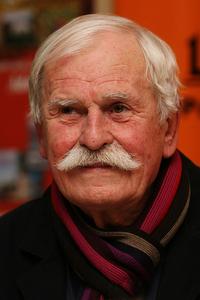 Adolf Born (12 June 1930 – 22 May 2016) was a Czech painter, illustrator, filmmaker and caricaturist, "known for his murkily-tinted pictures of bizarre fauna, and Victorian gentlemen in top hats and top coats". In recognition of his lasting contribution as a children's illustrator, Born was a finalist for the biennial, international Hans Christian Andersen Award in 2008. His various international rewards and honors also include the Grand Prix at the International Salon of Cartoons in Montreal and the Knight of the Order of Arts and Letters in France.
Read more or edit on Wikipedia