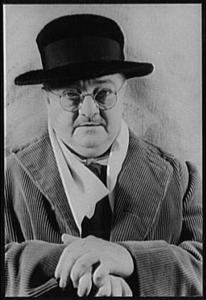 Alexander Humphreys Woollcott (January 19, 1887 – January 23, 1943) was an American critic and commentator for The New Yorker magazine, a member of the Algonquin Round Table, an occasional actor and playwright, and a prominent radio personality. He was the inspiration for Sheridan Whiteside, the main character in the play The Man Who Came to Dinner (1939) by George S. Kaufman and Moss Hart, and for the far less likable character Waldo Lydecker in the film Laura (1944). Woollcott was convinced he was the inspiration for his friend Rex Stout's brilliant, eccentric detective Nero Wolfe, an idea that Stout denied.
Read more or edit on Wikipedia