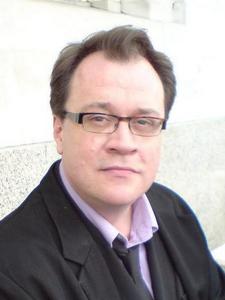 British screenwriter and showrunner, former executive producer of Doctor Who

Stephen Russell Davies (born 27 April 1963), better known as Russell T Davies, is a Welsh screenwriter and television producer whose works include Queer as Folk, The Second Coming, Casanova, the 2005 revival of the BBC One science fiction franchise Doctor Who, Cucumber, A Very English Scandal, Years and Years and It's a Sin. Born in Swansea, Davies had aspirations as a comic artist before focusing on being a playwright and screenwriter. After graduating from Oxford University, he joined the BBC's children's department, CBBC, in 1985 on a part-time basis and held various positions, which included creating two series, Dark Season and Century Falls. He eventually left the BBC for Granada Television, and in 1994 began writing adult television drama. His early scripts generally explored concepts of religion and sexuality among various backdrops: Revelations was a soap opera about organised religion and featured a lesbian vicar; Springhill was a soap drama about a Catholic family in contemporary Liverpool; The Grand explored society's opinion of subjects such as prostitution, abortion and homosexuality during the interwar period; and Queer as Folk recreated his experiences in the Manchester gay scene. His work in the 2000s included Bob & Rose, which portrayed a gay man who fell in love with a woman; The Second Coming, which focused on the second coming and deicide of Jesus Christ from a mostly non-religious point of view; Mine All Mine, a comedy about a family who discover they own the entire city of Swansea; and Casanova, an adaptation of the complete memoirs of Venetian adventurer Giacomo Casanova. Following the show's sixteen-year hiatus, Davies revived and ran Doctor Who for the period between 2005 and 2010, with Christopher Eccleston and later David Tennant in the title role. Davies' tenure as executive producer of the show saw a surge in popularity which led to the production of two spin-off series, Torchwood and The Sarah Jane Adventures, and the revival of Saturday prime-time dramas as a profitable venture for production companies. Davies was appointed Officer of the Order of the British Empire in 2008 for services to drama, which coincided with the announcement he would step down from Doctor Who as the show's executive producer with his final script, "The End of Time" (2009–2010). Davies moved to Los Angeles in 2009, where he oversaw production of Torchwood: Miracle Day and the fifth and final series of The Sarah Jane Adventures. Davies is set to return as showrunner of Doctor Who in 2023, the show's sixtieth anniversary. After his partner developed cancer in late 2011, Davies returned to the UK. He co-created the CBBC drama Wizards vs Aliens, and created Cucumber, a Channel 4 series about middle-aged gay men in the Manchester gay scene; Banana, an E4 series about young LGBT people in the Cucumber universe; and Tofu, an All 4 documentary series which discussed LGBT issues. Davies' later work for BBC One in the 2010s include A Midsummer Night's Dream, a television film adaptation of William Shakespeare's play; A Very English Scandal, a miniseries adaptation of John Preston's novel A Very English Scandal; and Years and Years, a drama series which follows a Manchester family affected by political, economic, and technological changes to Britain over 15 years. Davies returned to Channel 4 for a third time in 2021 as creator of It's a Sin, a semi-autobiographical drama about the HIV/AIDS crisis of the 1980s and 1990s.
Read more or edit on Wikipedia