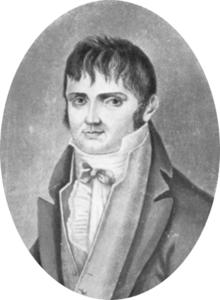 Constantine Samuel Rafinesque-Schmaltz (October 22, 1783 – September 18, 1840) was a French 19th-century polymath born near Constantinople in the Ottoman Empire and self-educated in France. He traveled as a young man in the United States, ultimately settling in Ohio in 1815, where he made notable contributions to botany, zoology, and the study of prehistoric earthworks in North America. He also contributed to the study of ancient Mesoamerican linguistics, in addition to work he had already completed in Europe. Rafinesque was an eccentric and erratic genius. He was an autodidact, who excelled in various fields of knowledge, as a zoologist, botanist, writer and polyglot. He wrote prolifically on such diverse topics as anthropology, biology, geology, and linguistics, but was honored in none of these fields during his lifetime. Indeed, he was an outcast in the American scientific community whose submissions were rejected automatically by leading journals. Among his theories were that ancestors of Native Americans had migrated by the Bering Sea from Asia to North America, and that the Americas were populated by black indigenous peoples at the time of European contact.
Read more or edit on Wikipedia