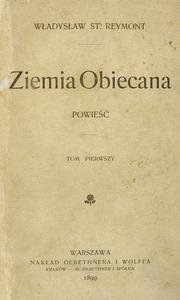 The Promised Land (Polish: Ziemia obiecana, Polish pronunciation: [ˈʑɛmʲia ɔbʲiɛˈt͡sana]) is an 1899 novel by the Polish author and Nobel laureate, Władysław Reymont; first published in Warsaw. It is considered one of his most important works after The Peasants. The novel The Promised Land was originally published as installments in the industrial city of Łódź by the daily Kurier Codzienny from 1897 to 1898. Set in Łódź, The Promised Land tells the story of three close friends and ruthless young industrialists: a Pole, a German and a Jew, struggling to build their own factory in the heartless world of the late 19th century labour exploitation. Reymont's novel vividly paints a portrait of the rapid industrialization of Łódź and its cruel effects on workers and mill owners. Reymont writes: "For that 'promised land' – for that tumor – villages were deserted, forests died out, the land was depleted of its treasures, the rivers dried up, people were born. And it sucked everything into itself. And in its powerful jaws it crushed and chewed up people and things, sky and earth, in return giving useless millions to a handful of people, and hunger and hardship to the whole throng". It was translated into English by Michael Henry Dziewicki in 1927.
Read more or edit on Wikipedia