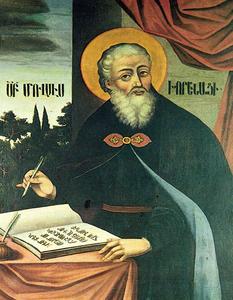 Movses Khorenatsi (ca. 410–490s AD; Armenian: Մովսէս Խորենացի, pronounced [mɔvˈsɛs χɔɾɛnɑˈtsʰi], also written as Movses Xorenac‘i and Moses of Khoren, Moses of Chorene, and Moses Chorenensis in Latin sources) was a prominent Armenian historian from the period of Late Antiquity and the author of the History of the Armenians. Movses is credited with the earliest known historiographical work on the history of Armenia written in Armenian, but was also a poet, or hymn writer, and a grammarian. The History of Armenia was written at the behest of Prince Sahak of the Bagratuni dynasty and has had an enormous impact on Armenian historiography. It was used and quoted extensively by later medieval Armenian authors. Although other Armenians such as Agathangelos had previously written histories on Armenia, Movses' work holds particular significance because it contains unique material on the old oral traditions in Armenia before its conversion to Christianity and, more importantly, traces Armenian history from Movses's day back to its origins. Movses is considered to be the "father of Armenian history" (patmahayr), and is sometimes referred to as the "Armenian Herodotus." Movses's work became the first attempt of a universal history of Armenia. Movses identified himself as a young disciple of Mesrop Mashtots, inventor of the Armenian alphabet, and is recognized by the Armenian Apostolic Church as one of the Holy Translators. The exact time period during which Movses lived and wrote has been the subject of debate among scholars since the nineteenth century, with some scholars dating him to the seventh to ninth centuries rather than the fifth.
Read more or edit on Wikipedia