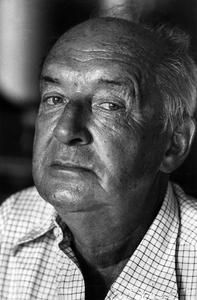 Vladimir Vladimirovich Nabokov (Russian: Влади́мир Влади́мирович Набо́ков [vlɐˈdʲimʲɪr vlɐˈdʲimʲɪrəvʲɪtɕ nɐˈbokəf] (listen); 22 April [O.S. 10 April] 1899 – 2 July 1977), also known by the pen name Vladimir Sirin (Владимир Сирин), was a Russian-American novelist, poet, translator, and entomologist. Born in Russia, he wrote his first nine novels in Russian (1926–1938) while living in Berlin. He achieved international acclaim and prominence after moving to the United States and beginning to write in English. Nabokov became an American citizen in 1945, but he and his wife returned to Europe in 1961, settling in Montreux, Switzerland. Nabokov's Lolita (1955) was ranked fourth in the list of the Modern Library 100 Best Novels in 2007; Pale Fire (1962) was ranked 53rd on the same list; and his memoir, Speak, Memory (1951), was listed eighth on publisher Random House's list of the 20th century's greatest nonfiction. He was a seven-time finalist for the National Book Award for Fiction. Nabokov was also an expert lepidopterist and composer of chess problems.
Read more or edit on Wikipedia