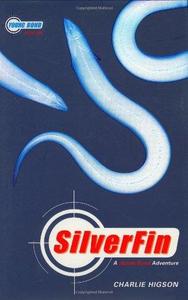 SilverFin is the first novel in the Young Bond series that depicts Ian Fleming's superspy James Bond as a teenager in the 1930s. It was written by Charlie Higson and released in the United Kingdom on March 3, 2005 by Puffin Books in conjunction with a large marketing campaign; a Canadian release of the same edition occurred in late March. The United States edition, which was slightly edited for content, was released on April 27, 2005 by Miramax Books. SilverFin's success spawned a mobile game published by PlayerOne on January 5, 2006 in conjunction with the release of the second novel in the Young Bond series, Blood Fever. The game features 3 locations, 15 levels, and a variety of enemies that the player must avoid. Because Ian Fleming never explicitly said when James Bond was born, Ian Fleming Publications and Charlie Higson chose the year 1920 as his birth year. SilverFin takes place in 1933.
Read more or edit on Wikipedia