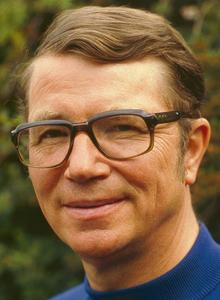 Colin Henry Wilson (26 June 1931 – 5 December 2013) was an English writer, philosopher and novelist. He also wrote widely on true crime, mysticism and the paranormal, eventually writing more than a hundred books. Wilson called his philosophy "new existentialism" or "phenomenological existentialism", and maintained his life work was "that of a philosopher, and (his) purpose to create a new and optimistic existentialism".
Read more or edit on Wikipedia