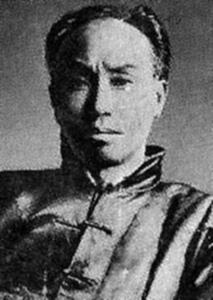 Chen Duxiu (Chinese: 陳獨秀; Wade–Giles: Ch'en Tu-hsiu; 8 October 1879 – 27 May 1942) was a Chinese revolutionary socialist, educator, philosopher and author, who co-founded the Chinese Communist Party (CCP) with Li Dazhao in 1921. From 1921 to 1927, he served as the Communist Party's first General Secretary. Chen was a leading figure in both the Xinhai Revolution that overthrew the Qing dynasty and the May Fourth Movement for scientific and democratic developments in the early Republic of China. After his expulsion from the CCP in 1929, Chen was for a time the leader of China's Trotskyist movement. Chen's ancestral home was in Anqing, Anhui, where he established the influential vernacular Chinese periodical New Youth (Xin Qingnian). In order to support overthrowing the Qing government, Chen Duxiu had joined Yue Fei Loyalist Society (岳王會; Yuèwáng huì) which emerged from Elder Brothers’ secret society (哥老會; Gēlǎo huì) in Anhui and Hunan province.
Read more or edit on Wikipedia