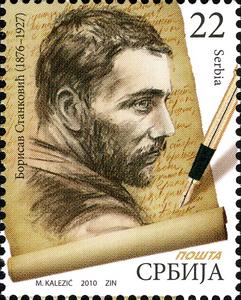 Borisav "Bora" Stanković (Serbian Cyrillic: Борисав "Бора" Станковић; 31 March 1876 – 22 October 1927) was a Serbian writer belonging to the school of realism. His novels and short stories depict the life of people from South Serbia. He belongs to an exceptional group of storytellers that appeared at the turn of the 20th century, Ivo Ćipiko, Petar Kočić, Milutin Uskoković, and others.
Read more or edit on Wikipedia