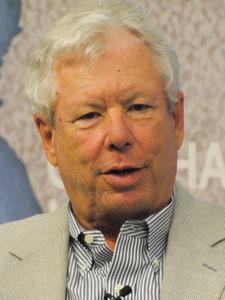 Richard H. Thaler (; born September 12, 1945) is an American economist and the Charles R. Walgreen Distinguished Service Professor of Behavioral Science and Economics at the University of Chicago Booth School of Business. In 2015, Thaler was president of the American Economic Association.Thaler is a theorist in behavioral economics who has collaborated with Daniel Kahneman, Amos Tversky, and others in further defining that field. In 2018, he was elected a member in the National Academy of Sciences. In 2017, he was awarded the Nobel Memorial Prize in Economic Sciences for his contributions to behavioral economics. In its Nobel prize announcement, the Royal Swedish Academy of Sciences stated that his "contributions have built a bridge between the economic and psychological analyses of individual decision-making. His empirical findings and theoretical insights have been instrumental in creating the new and rapidly expanding field of behavioral economics."
Read more or edit on Wikipedia