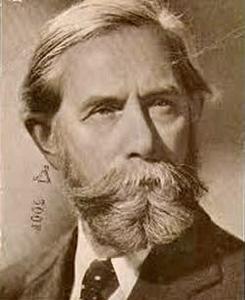 Alphonse Van Bredenbeck de Châteaubriant (French pronunciation: ​[alfɔ̃s də ʃɑtobʁijɑ̃]; 25 March 1877 – 2 May 1951) was a French writer who won the Prix Goncourt in 1911 for his novel Monsieur de Lourdines and Grand prix du roman de l'Académie française for La Brière in 1923. After a visit to Germany in 1935 he became an enthusiastic advocate for Nazism.Along with other Breton nationalists he supported fascist and anti-semitic ideas in opposition to the French state. In 1940 he founded the pro-Nazi weekly newspaper La Gerbe and served as President of the Groupe Collaboration. During World War II, he was a member of the central committee of the Légion des Volontaires Français contre le Bolchévisme, an organisation founded in 1941 by Fernand de Brinon and Jacques Doriot to recruit volunteers to fight alongside the Germans in the USSR. In 1945 he fled to Austria, where he lived under the alias Dr. Alfred Wolf until his death at a monastery in Kitzbühel.
Read more or edit on Wikipedia