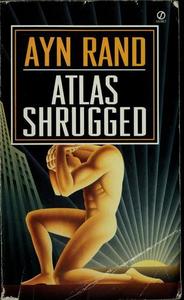 Atlas Shrugged is a 1957 novel by Ayn Rand. Rand's fourth and final novel, it was also her longest, and the one she considered to be her magnum opus in the realm of fiction writing. Atlas Shrugged includes elements of science fiction, mystery, and romance, and it contains Rand's most extensive statement of Objectivism in any of her works of fiction. The book depicts a dystopian United States in which private businesses suffer under increasingly burdensome laws and regulations. Railroad executive Dagny Taggart and her lover, steel magnate Hank Rearden, struggle against "looters" who want to exploit their productivity. Dagny and Hank discover that a mysterious figure called John Galt is persuading other business leaders to abandon their companies and disappear as a strike of productive individuals against the looters. The novel ends with the strikers planning to build a new capitalist society based on Galt's philosophy of reason and individualism. The theme of Atlas Shrugged, as Rand described it, is "the role of man's mind in existence". The book explores a number of philosophical themes from which Rand would subsequently develop Objectivism. In doing so, it expresses the advocacy of reason, individualism, and capitalism, and depicts what Rand saw to be the failures of governmental coercion. Atlas Shrugged received largely negative reviews after its 1957 publication, but achieved enduring popularity and ongoing sales in the following decades. After several unsuccessful attempts to adapt the novel for film or television, a film trilogy based on it was released from 2011 to 2014. These films were critical and box office failures.
Read more or edit on Wikipedia