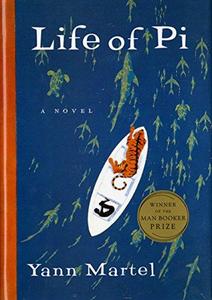 Life of Pi is a Canadian philosophical novel by Yann Martel published in 2001. The protagonist is Piscine Molitor "Pi" Patel, an Indian Tamil boy from Pondicherry who explores issues of spirituality and metaphysics from an early age. He survives 227 days after a shipwreck while stranded on a lifeboat in the Pacific Ocean with a Bengal tiger which raises questions about the nature of reality and how it is perceived and told. The novel has sold more than ten million copies worldwide. It was rejected by at least five London publishing houses before being accepted by Knopf Canada, which published it in September 2001. The UK edition won the Man Booker Prize for Fiction the following year. It was also chosen for CBC Radio's Canada Reads 2003, where it was championed by author Nancy Lee.The French translation L'Histoire de Pi was chosen in the French CBC version of the contest Le combat des livres, where it was championed by Louise Forestier. The novel won the 2003 Boeke Prize, a South African novel award. In 2004, it won the Asian/Pacific American Award for Literature in Best Adult Fiction for years 2001–2003. In 2012 it was adapted into a feature film directed by Ang Lee with a screenplay by David Magee.
Read more or edit on Wikipedia