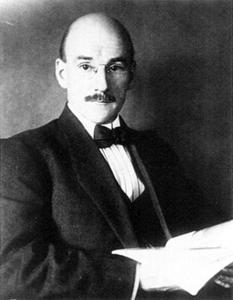 Henry Herbert Goddard (August 14, 1866 – June 18, 1957) was a prominent American psychologist and eugenicist during the early 20th century. He is known especially for his 1912 work The Kallikak Family: A Study in the Heredity of Feeble-Mindedness, which he himself came to regard as flawed, and for being the first to translate the Binet intelligence test into English in 1908 and distributing an estimated 22,000 copies of the translated test across the United States. He also introduced the term "moron" for clinical use.He was the main advocate for the use of intelligence testing in societal institutions including hospitals, schools, the legal system and the military. He helped develop the new topic of clinical psychology, in 1911 helped to write the first U.S. law requiring that blind, deaf and intellectually disabled children be provided special education within public school systems, and in 1914 became the first American psychologist to testify in court that subnormal intelligence should limit the criminal responsibility of defendants.
Read more or edit on Wikipedia