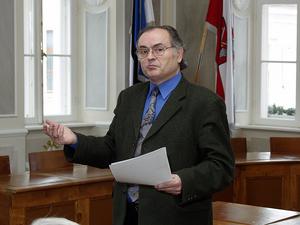 Aleksandr Dmitrievich Dulichenko (alternatively Alexander Duličenko; Russian: Александр Дмитриевич Дуличенко) (born 1941) is a Russian-Estonian Esperantist, linguist, and an expert in Slavic microlanguages currently living in Estonia. He is a professor at the University of Tartu in Tartu, where he is the head of the department of Slavic studies.Dulichenko was born in Krasnodar. He is the editor of Interlinguistica Tartuensis, a journal on interlinguistics published by the University of Tartu that published seven volumes from 1982 to 1990 recording the proceedings of colloquia at Tartu; in 2006, an eighth volume was published. A festschrift in Dulichenko's honor was organized in 2006; Humphrey Tonkin calls this volume a "particularly important addition to the literature" of interlinguistics and Esperanto studies.
Read more or edit on Wikipedia