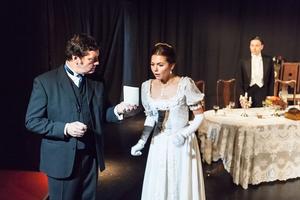 An Inspector Calls is a play written by English dramatist J. B. Priestley, first performed in the Soviet Union in 1945 and at the New Theatre in London the following year. It is one of Priestley's best-known works for the stage and is considered to be one of the classics of mid-20th-century English theatre. The play's success and reputation were boosted by a successful revival by English director Stephen Daldry for the National Theatre in 1992 and a tour of the UK in 2011–2012. The play is a three-act drama which takes place on a single night in April 1912, focusing on the prosperous upper middle-class Birling family, who live in a comfortable home in the fictional town of Brumley, "an industrial city in the north Midlands". The family is visited by a man calling himself Inspector Goole, who questions the family about the suicide of a young working-class woman in her mid-twenties. Long considered part of the repertory of classic drawing-room theatre, the play has also been hailed as a scathing criticism of the hypocrisies of Victorian and Edwardian English society and as an expression of Priestley's socialist political principles. The play is studied in many British schools as one of the prescribed texts for the English Literature General Certificate.
Read more or edit on Wikipedia