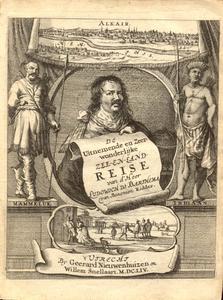 Ludovico di Varthema, also known as Barthema and Vertomannus (c. 1470 – 1517), was an Italian traveller, diarist and aristocrat known for being one of the first non-Muslim Europeans to enter Mecca as a pilgrim. Nearly everything that is known about his life comes from his own account of his travels, Itinerario de Ludouico de Varthema Bolognese, published in Rome in 1510.
Read more or edit on Wikipedia