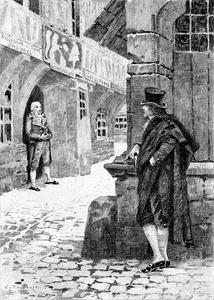 La Maison du chat-qui-pelote (At the Sign of the Cat and Racket) is a novel by Honoré de Balzac. It is the opening work in the Scènes de la vie privée (Scenes of Private Life), which comprises the first volume of Balzac's La Comédie humaine. First entitled Gloire et Malheur (Glory and Misfortune), this short novel was completed at Maffliers in October 1829 and published by Mame-Delaunay in 1830. The first edition was followed by four revised editions. The final edition, published by Furne in 1842, appeared under the title of La Maison du chat-qui-pelote and was itself corrected indefinitely.The idea for the story came from the haberdashery business run by the Sallambiers on the maternal side of Balzac's family. The work is dedicated to Mademoiselle Marie de Montheau.
Read more or edit on Wikipedia