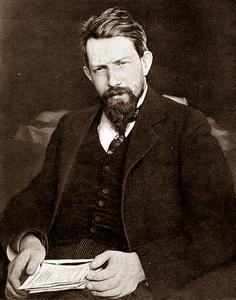 Peter (or Pyotr or Petr) Berngardovich Struve (Russian: Пётр Бернга́рдович Стру́ве; pronounced [pʲɵtr bʲɪrnˈɡardəvʲɪtɕˈstruvʲɪ]; 26 January 1870 in Perm – 22 February 1944 in Paris) was a Russian political economist, philosopher, historian and editor. He started out as a Marxist, later became a liberal and after the Bolshevik Revolution joined the White movement. From 1920, he lived in exile in Paris, where he was a prominent critic of Russian Communism.
Read more or edit on Wikipedia