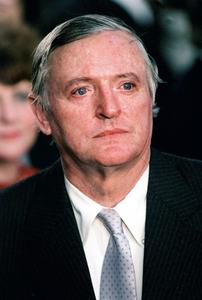 William Frank Buckley Jr. (born William Francis Buckley; November 24, 1925 – February 27, 2008) was an American public intellectual, conservative author and political commentator. In 1955, he founded National Review, the magazine that stimulated the conservative movement in the mid-20th century United States. Buckley hosted 1,429 episodes of the public affairs television show Firing Line (1966–1999), the longest-running public affairs show in American television history with a single host, where he became known for his distinctive Mid-Atlantic idiolect and wide vocabulary.Born in New York City, Buckley served stateside in the United States Army during the Second World War. After the war, he attended Yale University, where he engaged in debate and right-wing political commentary. Afterward, he worked for two years in the Central Intelligence Agency. In addition to editorials in National Review, Buckley wrote God and Man at Yale (1951) and more than fifty other books on diverse topics, including writing, speaking, history, politics, and sailing. His works include a series of novels featuring fictitious CIA agent Blackford Oakes as well as a nationally syndicated newspaper column.Buckley called himself both a conservative and a libertarian. George H. Nash, a historian of the modern American conservative movement, said in 2008 that Buckley was "arguably the most important public intellectual in the United States in the past half century. For an entire generation, he was the preeminent voice of American conservatism and its first great ecumenical figure." Political consultant Stuart Stevens, who served as a top strategist on Mitt Romney's 2012 presidential campaign, writes that "for all his well-crafted sentences and love of language, Buckley was often a more articulate version of the same deep ugliness and bigotry that is the hallmark of Trumpism."In both 1979 and 1981, Buckley's moral convictions were brought into question through court proceedings and crackdowns on his and his family's businesses by the Securities and Exchange Commission.
Read more or edit on Wikipedia